END_OF_DOCUMENT_TOKEN_TO_BE_REPLACED

Written by David MallabonePosted in Junior Team RoutinesTags: Night Fever1 May 2010Comments Off on Night Fever
2010 – 2011

After Hairspray, the XS Juniors were looking for a new and exciting challenge and so the coaches decided to give them the routine with which XS Latin adult team had won its third British National title in 2008 – Night Fever.

The routine, featuring songs like You Should Be Dancing, Staying Alive and How Deep Is Your Love, had proved very popular with the adult team and its supporters and so the juniors decided to rise to the challenge!  Wearing blue dresses with black fringing, the team debuted the routine at the 2011 British Junior Championships.

END_OF_DOCUMENT_TOKEN_TO_BE_REPLACED

XS compete at the 2009 World Championships

XS travelled to Bremen, Germany to represent England at the IDSF 2009 Latin Formation World Championships, and were very pleased to get 13th out of 19 teams from around the world. The local team won the day, with the team from Lithuania a close second.

END_OF_DOCUMENT_TOKEN_TO_BE_REPLACED

Written by WebmasterPosted in A Team,CompetitionsTags: Blackpool, British Opens, Night Fever15 May 2009Comments Off on The British Open Latin Formation Championships 2009 END_OF_DOCUMENT_TOKEN_TO_BE_REPLACED

After a very tight competition, XS Latin won the British National Latin Formation Championships, held in the Winter Garden’s Empress Ballroom in Blackpool. It’s the third time the team has won the title and means they will be representing England at next year’s European Championships in Lithuania.

END_OF_DOCUMENT_TOKEN_TO_BE_REPLACED

Written by WebmasterPosted in A Team,CompetitionsTags: Blackpool, British Opens, Night Fever30 May 2008Comments Off on XS Latin competes at British Open Championships 2008 Competing with their new Night Fever routine for the first time, XS Latin gave a good performance at the 2008 British Open in Blackpool and secured their chance to represent England at the World Championships later in the year in Austria.

END_OF_DOCUMENT_TOKEN_TO_BE_REPLACED

Written by David MallabonePosted in A Team RoutinesTags: Night Fever1 January 2008Comments Off on Night Fever
2008 – 2009 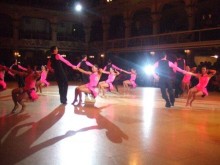 The inspiration for this, XS Latin’s 8th themed routine, was the London stage production of Saturday Night Fever, which played at the London Palladium and was choreographed by Arlene Philips. One of the team members, along with her sister, displayed a worrying devotion to the production, having seen it on stage several times, and, after some successful campaigning, persuaded the coaches and the team to buy into this theme. Perhaps a little dancing to Staying Alive at the 2007 World Championship’s after-party proved the clincher …

END_OF_DOCUMENT_TOKEN_TO_BE_REPLACED

Written by WebmasterPosted in A TeamTags: Night Fever1 January 2008Comments Off on XS Latin goes disco!

XS starts the year with a new routine. After enjoying the sounds of the Bee Gees at the Bremerhaven post-comp party, Night Fever was the natural choice.