Excitingly, the Lithuanian team won the competition, beating the top German team for the first time in three years. Many teams who have previously been in contention for finalist places were not recalled to the semi-final, proving once again that the calibre of Latin Formation is increasing universally. 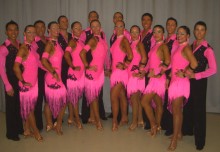