The 2015 UK Formation Championships, held in the Kings Hall, Stoke-on-Trent, once again provided a superb end to the summer season for XS Latin. Mark & Jayne Shutlar and Jason & Shemayne Parkinson had, for the second time, organised the Championships with efficiency and produced a competition which had a wonderful atmosphere and over 35 enthusiastic teams competing for an array of titles.

Juvenile and junior teams from Dance Crazy, Dance With Passion, Starlite and Latin Steps schools competed for the junior and juvenile titles with tremendous energy and support from their colleagues. Also, for the first time, the Championships saw a 4 couple Adult Championship, which was won by the sole entrants, Dance With Passion Disco Team, who performed an entertaining routine with some innovative choreography.

The Adult 6-8 Couple Championships saw 4 teams contesting the title. Dance With Passion Adult team opened the competition performing their recent FTA competition winning Queen routine. This team, which has a good pedigree, having made the final of the last two British National Championships, danced a reliably solid performance. XS Latin B team drew second. The team had suffered a potentially difficult few days having lost a couple due to injury three days before the Championship. Despite this, the team were very pleased to put in a very strong performance of their Vogue routine, displaying good teamwork and patterns. Kent Adult Team drew third and their performance was significantly enhanced from the recent FTA competition with the addition of some former members of their very good junior team. XS Latin A team concluded the final with The Girl from Tiger Bay. The team offered a powerful and emotional performance with some superb pattern transitions and good trick sequences to retain their title.

The XS B team were delighted to be announced in second place, with Kent Adult Team in third and Dance With Passion concluding the line-up for this strong final.

XS Latin A team are very proud to have won the UK Championship for the fifth year in succession, and both teams now look forward to the winter season. The club would like to thank all those who supported the team on the day. 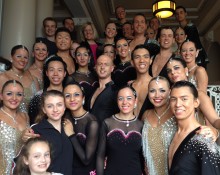