XS Success at Stars of the Future 2015

XS Latin has a long history of their couples competing at Stars of the Future, one of the largest competitions for dancers in the UK.

Stars of the Future 2015 was held on Saturday 6th June and a record number of current and alumni XS couples entered, enjoying great success in a wide range of categories, and with the vast majority of couples reaching the semi-final or final of their latin event.

– Two XS A team couples competed in the U35 Pre-Champ Latin category, both of whom made the final amidst strong competition. Kien Trinh and Kirsty Davies, buoyed by their best ever result at this year’s British Open Championships, continued to perform with passion to place second, with Konstantin Wolf and his partner placing fourth.

– XS A team dancer Kenneith Yong and XS alumna Olesya Nikiforova, who had also reached the second qualifier of the British Open Championships in May alongside Kien and Kirsty, entered the Amateur five dance and made the semi-final.

– In the Senior events, XS was represented by XS alumni Paul and Vesna Fannon, who won both O35 Ballroom and O35 Latin with ease, and also by current XS B dancers Steve Irish and Claire Nugent. Although Steve and Claire have competed on XS B as a couple for almost 3 years, this was their first open circuit competition together and they were thrilled to make the final and placed 6th.

– Two of our newest XS dancers, Lydia Turner and Pavel Kohout, competed together for the first time, and made a great debut by winning U35 Beginners Latin. Lydia is also one of XS Latin’s youngest dancers, having turned 15 only recently.

– A team dancer Rachel Hardisty, having chosen to learn the B team’s new routine as a leader, decided that she wanted to learn more about leader’s technique and entered the All-Ladies Latin with teammate Chi-He Elder. This is the first time XS has been represented in an all-ladies event and they came a creditable second place.

Congratulations to all the XS dancers who competed, and to David Mallabone for coaching them all and making these results possible. 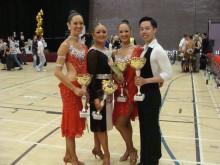 Written by RaquelPosted in A Team,B Team,Competitions,XS Latin Dancing News22 July 2015Comments Off on XS Success at Stars of the Future 2015