Ten latin formation teams, including teams from China, USA, Germany, Hong Kong, England and Wales, arrived to contest the 2015 British Open Championships. The Championships, the 90th Anniversary of the Blackpool Dance Festival, had been memorable with the retirement of four of the world’s top professional latin couples on the Wednesday night, including Michael Malitowski and Joanna Leunis,who announced their retirement from competitions just after having won their record-breaking 8th Professional Latin Championship.

The Latin Formation title was won by the Beijing Dance Academy Secondary School with their Egyptian themed routine. They had placed second in 2014 and had returned with a very theatrical programme, which included some innovative choreography. The runners-up were last year’s winners, Guangzhou Arts School Latin Formation. Their routine opened with a Bollywood theme and finished with music from Disney’s Aladdin. Utah Valley University placed third with a programme based around the music of Motown.

XS Latin A danced a disappointing semi-final, given their recent progress. But the team dug deep and were pleased to dance a very strong final with their The Girl from Tiger Bay routine.  This resulted in their being placed 4th, the highest placed European team in the competition. The last two spots in the final were taken by TSC Altenburg E.V. from Germany and Ystrad Fawr Adult Latin Team from Wales.

XS Latin B danced the competitive debut of their new routine, Vogue. The team, wearing new dresses by DC Dancewear, gave a superb performance and one which, for many, rated as by far their best competitive outing to date. Given this, the team were disappointed to place 8th but are optimistic about the progress made and how this augers for the coming year.

Both teams would like to thank the many supporters who travelled to cheer them on in Blackpool and are now looking forward to the forthcoming UK Championships. 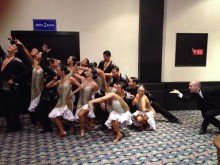