XS Latin A makes the final in the Netherlands

Eleven teams arrived to contest the European Dance Explosion Gala, including teams from Holland, Austria and Germany.  XS Latin’s preparations had been somewhat disrupted due to factors including injury and work commitments and so the first round performance, which demonstrated some powerful dancing and strong patterns was very pleasing and garnered a very positive response from the enthusiastic audience in the venue.  The team safely made the final with full recalls, beating teams that have beaten them at the World Championships in recent years, and then went on to dance a strong performance of their Girl from Tiger Bay in the final.

Some very varied marking in the final (with the five seventh place marks each going to a different team) saw a very close result.  The hosts, Dance Explosion A Team, emerged triumphant, with FCP Perchtoldsdorf from Austria taking the silver medal.  The 2014 World Championship finalists, Double V A team, dancing Legends, took the third place.  XS Latin were pleased to finish in 5th in this high standard final.

XS Latin would like to thank the organisers for a good competition and are now looking forward to the rest of 2015. 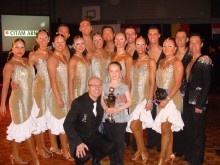 Written by David MallabonePosted in A Team,Competitions30 March 2015Comments Off on XS Latin A makes the final in the Netherlands