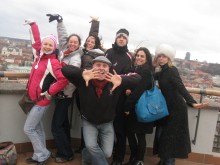 On December 2nd 2011, XS Latin A team flew to Vilnius in Lithuania for the 2011 World Latin Formation Championships.  The anticipation for this competition had been building for several months: the host team had prepared very hard for the competition but were to face stiff competition from the 2010 World Champions, Vera, from Russia and the 2009 World Champions, GGC Bremen, who had just convincingly won the German Nationals with their new routine, Blast.