Vice-Champions at the Zala Open

On 25th October 2015, XS Latin A team competed for the first time in Hungary.  The Zala Open, hosted by World Championship semi-finalists Gala TE, was held in Zalaegerszeg and, with the British National and World Championships on the horizon, promised to provide the team with a good opening competition for the season.

Teams from Hungary, Poland, Austria and England participated in the competition.  After a solid first round and a good final performance of The Girl From Tiger Bay the team were delighted to finish in the silver medal position behind the host team.  The result was very close, with the judges deciding on the top spot by a majority of four judges to three, which augers well for the rest of the season.  FCP Perchtoldsdorf, who finished second in the Dance Explosion Gala in Arnhem in March, finished in third place with their Bon Jovi routine.

The team would like to thank the hosts for organising such a good event and the supporters who travelled out with the team.
Please Log in to view this content. 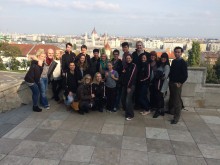