At the end of the 2009 season the team produced a Shirley Bassey music, intending to start work on it the following year.  However, at the 2009 British National Championships, Ystrad Fawr danced a Shirley Bassey programme and the team’s visit to Tiger Bay was put on hold for four years.  But XS Latin always intended to return to the idea and, after winning their sixth British National title with Bat Out Of Hell, the team started working on The Girl From Tiger Bay in January 2014.

The routine was a celebration of the incredible voice and performances of legendary Welsh singer, Shirley Bassey.  It featured all-time classics such as Goldfinger and Diamonds Are Forever, as well as more recent songs, such as her wonderful cover of Get The Party Started, which opened the routine.  The music was notable for XS because it was the first time that a song had featured in two different XS routines.  Big Spender, which opened On Broadway, closed The Girl From Tiger Bay.

XS Latin was delighted to make its first international Championship semi final with Tiger Bay, placing 9th in the European Championships in May of 2014.

The Girl From Tiger Bay was performed at: 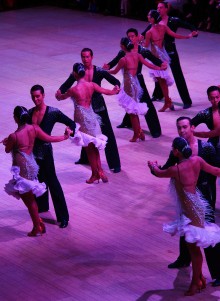