Aachen played host to the 2014 WDSF European Latin Formation Championships, holding the event in the town of Düren.  XS Latin Cambridge A Team were England’s representatives and were taking their brand new routine, The Girl From Tiger Bay, for its first competitive outing.

The event was extremely well organised and the venue, although not small, proved intimate and provided a great atmosphere for the competition.  Thirteen teams danced in the first round and the organisers decided to select ten teams to dance in the semi-final.  As the XS Latin team had only been working on their new choreography for three months the level of expectation in the team camp was not as high as in recent years.  Still, the team were hopeful of a good debut for the routine and drew to dance fifth in the first round.  The team danced beyond expectations and performed with conviction and energy and were absolutely thrilled to find that they had made the prestigious semi final for the first time in XS’s history, with a convincing six out of the seven judges recalling them to the second round.

In the semi-final, the team drew after the World Champions, GGC Bremen.  They performed an even cleaner and neater routine than in the first round, but maybe lacking the attack of the debut performance.  However, the team was delighted with the finishing position of 9th equal, the highest for a British team at an international championship since 2003 and a tremendous first competition for the new routine.

The final was a splendid event, with the top three teams offering exciting and very different performances.   The hosts, FG Aachen-Düsseldorf, danced a final that was full of passion and hunger for the title.  Their performance of Persia, A New Experience was probably the most attacking they have given and it was enough to secure them a narrow victory over the reigning World Champions, GGC Bremen, dancing their final performance of The Final Countdown with clarity and strength.  Vera Tyumen danced with their usual beautiful technical quality to take the bronze medal with You.  Full results can be found here.

XS Latin would like to thank the hosts for a fantastically organised event and wonderful hosting, all of our supporters for their very many messages of support and congratulations and, in particular, Capezio Europe for their continued support. 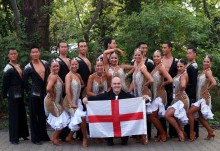 Written by David MallabonePosted in A Team,Competitions,XS Latin Dancing News5 May 2014Comments Off on XS Latin places 9th at 2014 European Championships