Seven teams travelled to Blackpool to compete in the 2011 British National Formation Championship. XS Latin A team were very excited to support their B team colleagues who put on a crisp show full of excellent patterns to open the semi-final with their competitive debut.

XS Latin A closed the semi-final and, after dancing a good semi and receiving full recalls back to the final, the team once again proved they can produce their strongest performances when needed by stepping their performance up for the final. Their excellent execution of their Priscilla, Queen of the Desert routine was enough to secure a convincing victory, with eight of the eleven adjudicators marking the team in first place. This was a particularly important result for the team as it means that XS Latin has now equalled the record of five British National Formation titles. Particular congratulations to three of the team’s dancers, Rob Less, Lisa McIntyre and Andras Zsak, who have been on the team for all its five Championship wins.

Particular thanks to the team’s sponsors, Capezio, to XS Latin B for all its support and to all of the supporters who travelled to Blackpool to cheer the team on.
[xdataqueryinterface queryint=”XSVideo” type=”page” linked_item=”no” transformparameters=”comp::British Nationals:::year::2011″] 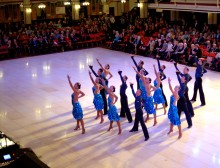