XS Latin at Champions of Tomorrow

Every January the renowned Empress Ballroom in Blackpool sees hundreds of couples from under 10s to over 45s competing for the titles of Champions of Tomorrow. XS Latin has had a long tradition of success at this competition, but 2014 may be one of the club’s best yet.

This year the number of XS members entering the competition was significantly higher than in recent years, and the dancers arrived at Blackpool full of enthusiasm and confidence. The standard of dancing was very high, but the club’s members rose to the challenge and delivered some great performances.

XS A Team’s Konstantin Wolf and Kim Wagenaar, together with Shin Bin Lim, Chi-He Elder and their partners, competed in the Under 35 Intermediate Ballroom and Latin events and reached the semi-finals of both. Kien Trinh and Kirsty Davies reached their first Intermediate Ballroom final, placing 3rd overall in a strong field. Paul Fannon and Vesna Kadelburg achieved 5th place in the Under 35 Intermediate Latin final, and won 3rd place in Under 35 Pre-Amateur Ballroom.

There was a heavy XS presence in the Under 35 Pre-Amateur Latin category with Kien and Kirsty, Misha Aizatulin and Harriet Waghorn, Stu Cork and Dafni Metaxa, and former members Luke White and Halliki Voolma and Kit Davies and his partner Ksenia Zhedlukova all competing. From a start list of over 30 couples, four of the XS pairs reached the semi-final, with Kit and Ksenia going on to win the prestigious competition.

With such a wonderful start of the new competitive season, XS Latin is heading into 2014 full of hope and enthusiasm.

Full results can be seen here.

XS Latin would like to thank Capezio Europe for their continued support. 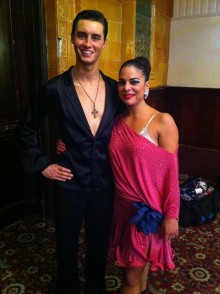