A trip to the theatre in London in Autumn 2009 for several members of the team, which resulted in one member enthusiastically taking to the stage (and struggling to find his way off!), provided the inspiration for XS Latin’s 9th routine, Priscilla, Queen of the Desert.

The music featured classic tracks from the Australian film and the stage show including Finally, Don’t Leave Me This Way, MacArthur Park and I Will Survive.

Some debate about costumes seemed necessary and, after it was deemed that drag queen catsuits with lizard heads and 6″ platform shoes were probably not ideal apparel in which to dance a formation routine, turquoise sequined dresses for the women and black and turquoise shirts for the men were agreed upon.

XS Latin were delighted that Priscilla, Queen of the Desert was the routine which helped them capture both their fourth and their record equalling fifth British National Championship titles in November 2010 & 2011.  Priscilla was also the routine with which they won their first title at the reinstated UK Formation Championships in June 2011 and made their first international final at the Danube Cup in December 2010.

Priscilla, Queen of the Desert was performed at: 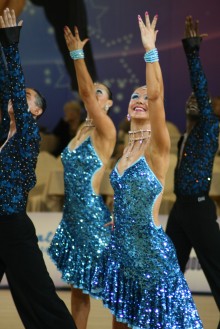 Written by David MallabonePosted in A Team Routines4 July 2010Comments Off on Priscilla, Queen of the Desert
2010 – 2011