After five previous routines which were inspired by pop or film music, XS decided that the sixth routine was about time for a latin formation team to use authentic Latin American music and Song of South America was born.

Using a salsa rueda for an entry, the music comprised Hispanic classics such as La Historia De Amor, Besame Mucho, Brazil and Quién Sera (Sway). With Bruce Lait and Crystal Main on tour with the stage show Strictly Ballroom Dancing, the musical arrangement and choreography were created by David Mallabone, with the music being produced by Roger Chatterton of Kite Recording in Cambridge. In order to capture the spirit of the carnival theme, the team opted for red dresses with full skirts and black polka dots.

Performing Song of South America, XS Latin retained its British title at the National Championships in Blackpool, November 2006. It was also invited to compete in Austria for the first time at the Donaupokal Latin Formation invitation competition in December 2006. Nineteen teams from across Europe were invited and XS were pleased to make the semi-final of this prestigious competition.

Song of South America was performed at: 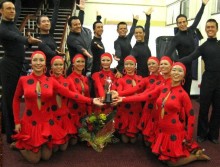