Following on from the Aladdin theme did not prove to be an easy task. Former member David Mallabone, having turned professional in 2004, was now on board as a coach and so, as an easy induction, was given the task of arranging the music for the new theme. Having completed a My Fair Lady themed music and rejecting it and then completing a George Michael themed music and rejecting this too, things were getting desperate! Finally, using Bruce’s experience and inspiration, the idea for a Tom Jones theme was suggested and followed through.

Arranged by David and produced by Mick Wilson, the music captured the essence of the Welsh star, possibly in the hope that middle-aged women would throw their underwear at the team and scream for more! The programme includes classic hits like It’s Not Unusual, Delilah, Help Yourself and Sexbomb and was an instant favourite with the dancers on the team. The costumes, again designed and made by Crystal Main, were in bright pink with fringing.

Tom Jones will always be a memorable theme for XS as it was the routine which helped the team capture its first National Title, becoming British Champions in November 2005.

Tom Jones was performed at: 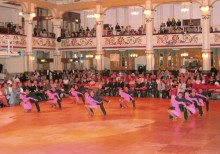