A discussion in Vilnius Airport on the return journey from XS’s first trip to the IDSF World Championships turned into a brainstorming for a new theme and Aladdin emerged triumphant from that debate. Inspired by the Disney animated movie, this routine debuted at the British National in November 2003.

This six month turn around since the last appearance of Moulin Rouge at the British Open in June 2003 proved to be XS’s fastest yet — previous routines had taken at least one year from inception to competitive debut. The music, produced by Brian Cowe, included Friend Like Me, One Jump Ahead and A Whole New World, with Arabian Nights featuring as a high-energy entrance. The dresses, designed and made by Crystal Main, were in blue, with gold coin decoration and gold head-dresses, fashioned to capture the Middle Eastern theme.
This might have been too effective; after completing this routine two members of the team moved to the Middle East, one to live in Dubai and one to Oman!

Aladdin was performed at: 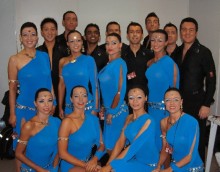 Written by David MallabonePosted in A Team RoutinesTags: Aladdin1 January 2003Comments Off on Aladdin
2003 – 2004