Following the success of Sarafina, the team decided to purchase its second routine from German team TSG Braunschweig. With Bruce Lait now on board as coach, and a large turn around in membership, the team spent the latter half of 1999 and the first half of 2000 working on the new choreography.

The routine was aptly entitled Mystery; the underlying theme being somewhat mysterious! The music opened with Madonna’s Frozen and then moved through various chart hits of the ‘70s, ‘80s and ‘90s including Rose Royce’s Wishing On A Star, Queen’s Who Wants To Live Forever and R. Kelly’s number one hit I Believe I Can Fly.

The team’s first outing with the new routine came at the British Closed Championship in Blackpool in 2000. The same costumes as had been worn for Sarafina were donned for this competitive appearance, with new red costumes, made by Amy Bennett, made for the following competition in 2001.

Mystery was performed at: 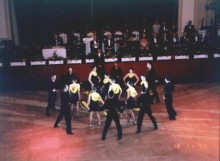