We have performed many routines over the years. Here, you can read about the history of each routine, its inspiration, where we competed with it, and other tidbits. 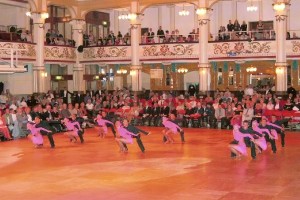 Following on from the Aladdin theme did not prove to be an easy task. Former member David Mallabone, having turned professional in 2004, was now on board as a coach and so, as an easy induction, was given the task of arranging the music for the new theme. Having completed a My Fair Lady themed music and rejecting it and then completing a George Michael themed music and rejecting this too, things were getting desperate! Finally, using Bruce’s experience and inspiration, the idea for a Tom Jones theme was suggested and followed through.

END_OF_DOCUMENT_TOKEN_TO_BE_REPLACED A discussion in Vilnius Airport on the return journey from XS’s first trip to the IDSF World Championships turned into a brainstorming for a new theme and Aladdin emerged triumphant from that debate. Inspired by the Disney animated movie, this routine debuted at the British National in November 2003.

END_OF_DOCUMENT_TOKEN_TO_BE_REPLACED 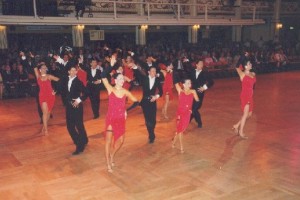 The arrival on the big screen of the Baz Luhrmann film, Moulin Rouge, provided inspiration for the third XS routine. This time, the music and choreography were done ‘in-house’ and the team, for the first time, appreciated the enormity of the task of putting together a music and choreography for 8 couples and 6 minutes that moves smoothly between the cha cha, rumba, samba, paso doble and jive.

END_OF_DOCUMENT_TOKEN_TO_BE_REPLACED 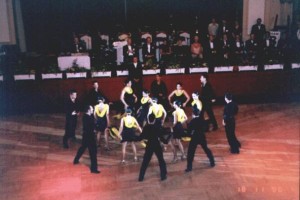 Following the success of Sarafina, the team decided to purchase its second routine from German team TSG Braunschweig. With Bruce Lait now on board as coach, and a large turn around in membership, the team spent the latter half of 1999 and the first half of 2000 working on the new choreography.

END_OF_DOCUMENT_TOKEN_TO_BE_REPLACED Loaned from TSG Braunschweig (at the time a first division German latin formation team), Sarafina was the routine that started it all.