Thirty dancers from the XS Latin A, B and C teams descended on Quayside on Saturday 6th July to perform an impromptu latin-based flashmob to the delight of the crowds of onlookers!

END_OF_DOCUMENT_TOKEN_TO_BE_REPLACED

The British Open Latin Formation Championship 2013 was held on 31st May in Blackpool, less than two weeks after both the XS Latin A and B teams returned from competing at the WDSF European Latin Formation Championships in Lithuania. With four XS couples also competing earlier in the week in the individual Amateur events at Blackpool (27th and 29th May), this meant that there was very little rehearsal time available to the teams between the two competitions!

END_OF_DOCUMENT_TOKEN_TO_BE_REPLACED On May 18th, XS Latin A and B teams both competed at the WDSF European Latin Formation Championships 2013, held in Vilnius.

END_OF_DOCUMENT_TOKEN_TO_BE_REPLACED

Successful casting session for the 2013 season 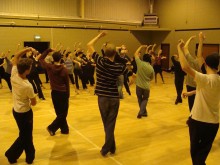 Undeterred by the snowy weather, over 40 dancers attended the XS 2013 casting session held on Monday 14th January at Milton Community Centre. Dancers ranged from complete beginners to experienced competitors, having heard about XS through the team’s latest advertising campaign, which included appearances by XS members in the local paper and on the radio.

END_OF_DOCUMENT_TOKEN_TO_BE_REPLACED XS Latin is NOW SEEKING new dancers of all experience levels to join them for 2013!