XS Latin Junior team made its Blackpool debut dancing its Hairspray routine in the 2010 British Junior 6-8 Couple Formation Championship. For a first time at this prestigious event the team danced with tremendous energy and confidence. The team and its supporters were extremely proud to finish in 12th place out of 23 teams.

Posted in A Team,Press4 February 2010 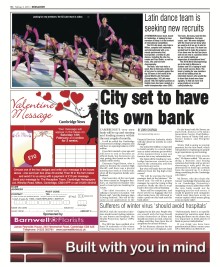 XS compete at the 2009 World Championships

XS travelled to Bremen, Germany to represent England at the IDSF 2009 Latin Formation World Championships, and were very pleased to get 13th out of 19 teams from around the world. The local team won the day, with the team from Lithuania a close second.

END_OF_DOCUMENT_TOKEN_TO_BE_REPLACED

Posted in A Team,CompetitionsTags: Blackpool, British Opens, Night Fever15 May 2009 END_OF_DOCUMENT_TOKEN_TO_BE_REPLACED

After a very tight competition, XS Latin won the British National Latin Formation Championships, held in the Winter Garden’s Empress Ballroom in Blackpool. It’s the third time the team has won the title and means they will be representing England at next year’s European Championships in Lithuania.

END_OF_DOCUMENT_TOKEN_TO_BE_REPLACED

Posted in A Team,CompetitionsTags: Blackpool, British Opens, Night Fever30 May 2008 Competing with their new Night Fever routine for the first time, XS Latin gave a good performance at the 2008 British Open in Blackpool and secured their chance to represent England at the World Championships later in the year in Austria.

END_OF_DOCUMENT_TOKEN_TO_BE_REPLACED

XS starts the year with a new routine. After enjoying the sounds of the Bee Gees at the Bremerhaven post-comp party, Night Fever was the natural choice.

Posted in A Team,CompetitionsTags: Donaupokal Cup, On Broadway, Vienna15 December 2007

XS finished the year with a fantastic performance at the Donaupokal Invitational Competition in Vienna, Austria. Twenty-five teams from seven countries took to the floor and XS were placed 8th, only one mark away from making the prestigious final.