On May 18th, XS Latin A and B teams both competed at the WDSF European Latin Formation Championships 2013, held in Vilnius.

XS Latin A team, having placed 13th at many recent World Championships, went with the goal of making the semi-final of a European Championship for the first time. Despite having competed at every World Championship since 2002, XS Latin A team has only been able to attend a European championship once before, in 2007; unfortunately team dancers frequently have university exams that prevent participation. The slightly later-than-normal date of this year’s event meant that the team was extremely excited to be able to attend and preparations were very good, leading to optimism in the camp.

Significant changes to their routine since December, including a total overhaul of the walk-on music and choreography, aimed to make their routine, Bat Out of Hell, cleaner and more dynamic. With five dancers new to the team since January, all of whom were making their debut at a WDSF formation championship, everyone had worked very hard to rebuild the team and achieve the required standard.

At their Saturday morning rehearsal XS Latin A drew 15th of 16 teams, between Vera and Zuvedra A who went on to place 2nd and 1st respectively. The team’s performance began quite cautiously, gaining more confidence in the second half of the routine. Unfortunately, this was not enough and the team was very disappointed to hear that they had not been recalled to the semi-final. After the competition and some sober reflection, the team refocused on what they could do differently at Blackpool in only 1.5 weeks’ time.

XS Latin B team have only been in existence for 2 years, and only two of their dancers had ever competed at a WDSF formation championships before. They went to the European Championships purely for the experience, and threw themselves into their first ever performance of their new routine, The Blues Brothers, with great enthusiasm. This competition was a very beneficial opportunity for them, enjoyed by the whole team. The B team’s attendance at the Europeans also means that XS Latin is now only the third club in history to have sent two teams to the same WDSF formation championships (the other two being Zuvedra and Double V, both of whom also sent two teams to this year’s Europeans).

After the first round, the XS dancers all watched the semi-final and final with great interest. Some of the results were surprising and several teams did significantly better or worse than might have been expected based on the performances given.

Schwarz-Gold were evidently thrilled to win the closely-fought battle for the 6th place in the final, with screams of delight from the changing rooms being audible from the top row of the auditorium when the recalls were announced!

In fifth place was Zwolfaxing, dancing their exciting and impactful routine, And the Oscar Goes to…. Zwolfaxing was notably the only team in the final to pull off an error-free performance.

Second place was incredibly close, with Vera narrowly winning the silver medal as a result of Bremen astonishingly receiving a 5th place mark. Vera were dancing their new routine, You, which is full of very innovative and original choreography and displaying wonderful dancing from individual couples. However, the synchronicity and clarity displayed by Bremen as a team, dancing The Final Countdown, was superior.

Zuvedra were worthy winners, to the delight of the home-crowd, putting on a performance of their Rio routine that was far more powerful and confident than it had been at the World Championships in December.

XS Latin would like to thank Zuvedra and the WDSF for hosting a well-organised competition, as well as their supporters, and their sponsors, Capezio. 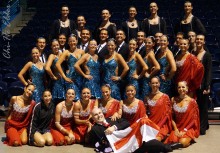 Written by RaquelPosted in A Team,B Team,Competitions,XS Latin Dancing News2 July 2013Comments Off on XS takes two teams to the European Championships!