The routine opened and finished with the Blues Brothers’ standard Everybody Needs Somebody and travelled through many soul classics including Think, Soul Man and Flip, Flop and Fly.  The women were dressed in blue heavily-sequinned dresses, whilst the men wore black jackets, white shirts and black ties to create the look of the 1980 film, which starred Dan Aykroyd and John Belushi.

XS Latin B was very proud to debut The Blues Brothers at its first ever WDSF Championship, the European Championships held in Vilnius on May 18th 2013.

The Blues Brothers was performed at: 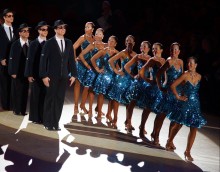