XS Latin closed the 2012 season with both the A and B teams travelling to Vienna to participate in the annual 2012 Danube Cup. With teams from Austria, Poland, Hungary, Germany and the UK the competition promised to be an exciting end to the year.

The B team competed in the second division competition, which had entries from 11 teams, including former World Championship competitors Blau-Grun Wien A team. After three great rounds of dancing, including a first round which was probably the team’s best ever performance of their Cabaret routine, XS Latin B placed fifth in the final behind four teams from Austria.  Blau-Grun Wien A team emerged as the winners of the competition dancing their Beyonce programme entitled I Am Yours.

XS Latin A, dancing in the first division, were competing against several teams that had participated in the World Championship two weeks earlier, including World Championship finalists HSV Zwolfaxing A team. The team danced a solid semi final and then an excellent performance of Bat Out Of Hell in the final and were delighted to place in fourth position.  HSV Zwolfaxing won the tournament in a very close contest with German first division team Quirinus-Neuss.  Schwartz-Gold Wien placed third with their Don’t Stop Believing choreography.

The team would like to thank all of their supporters and sponsors, Capezio, for a great year and are now looking forward to the 2013 season. 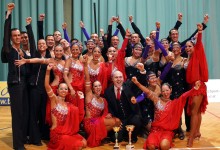 Written by David MallabonePosted in A Team,B Team,Competitions,XS Latin Dancing News9 January 2013Comments Off on XS Latin successful in Vienna