The 2012 World Formation Championship was held in Bremen, Germany, in December.  With three of the top four ranked teams dancing new programmes, the anticipation amongst formation aficionados was great.  XS Latin drew 13th in the first round and danced their best ever performance at a World Championship, after making small changes to their Bat Out of Hell choreography.  With three recalls to the semi-final the team placed in a clear 13th position and were one recall from the team in 11th position.  This also made them the highest placed British team in the competition.

After an exciting final, in which the top three placed teams all danced clean performances, the hosts, GGC Bremen, with their Final Countdown routine emerged winners.  Lithuania’s Zuvedra A team danced their brand new Rio choreography to win the silver medal.  Vera Tyumen, from Russia, took the bronze medal with their Around the World programme.

XS Latin would like to thank the organisers for a very well organised Championship, along with Capezio Europe for all of their support.  In addition, it was very pleasing for the team to have so many supporters, trainers and competitors from other teams congratulate them on the performance. 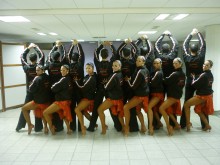