The women were costumed in black and silver fringed dresses in the 1930s style, with purple gloves, penny-dropper decorations and headbands to create a period feel.  Over the course of the routine, as the team developed in experience, the routine increased in speed and more tricks were added.  The routine debuted at the 2011 British National Championships and the team performed it for the final time at the 2012 Danube Cup in Austria.

Cabaret was performed at: 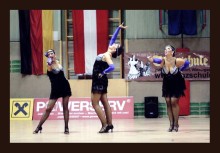